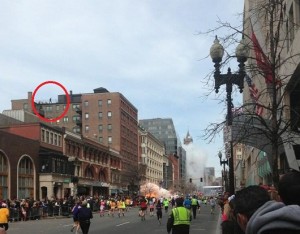 In the above picture, a man is atop a building near the site of the Boston Marathon where bombings killed 2 people and injured 23 others. It is incidences like this that cause people to wonder about conspiracy theories.

Is there a connection between the Boston Marathon bombs and the Illuminati? Or is it a false flag operation instigated by the FBI? Or is it just a ‘simple’ case of someone evil bombing people?

According to Illuminati Watcher, there have been conflicting media reports concerning the issue of whether or not there were ball bearing-inflicted wounds on the 23 injured runners. Whenever there are conflicting media reports, many people feel that the truth is not as simple as it appears to be. For example, in other tragedies that have occurred in the United States, one red flag, as it were, is the issue of multiple shooters. In this case involving the Boston Marathon, it is the issue of ball bearings.

Alex Jones, someone who regularly analyzes these situations with regard to potential false flag operations, has quoted a coach as saying that even before the race began, there were bomb-sniffing dogs. Of course, the people running the marathon (pardon the pun) might have received a warning without the government having been involved.

Jones himself has been quoted as stating that the FBI is behind almost every domestic terror plot in the States. To defend himself, according to this article, Jones could point to the Reichstag fire, and the Gulf of Tonkin controversy.

Another common aspect that unites these occasional tragedies is that someone will report a social media page (in this case, Facebook) where someone has set up a page that discusses a tragedy before it actually occurs. The article I’m summarizing discusses how a title of a Facebook page set up 2 days before the marathon bombings was “Thoughts go out to all involved in the Boston explosions.”

But perhaps the most interesting thing that this article points out is the Illuminati playing card “Joggers.” I have discussed these cards before. They were a game released in the 1990s, and the cards refer or hint at tragedies that had not yet occurred.

I am an amphiist, which I define as someone who looks at both sides of issues (it’s a Greek word). However, I have my own expanded definition, which means that I believe in three interrelated concepts, which, when taken together, inform an amphiist viewpoint. Abraham Maslow talked about self-actualization, a person reaching their highest potential. Thomas Carlyle discussed natural aristocracy, which is a principle the Founding Fathers created with regard to the United States, that a person did not have to be of royal birth to have merit; it was the content of their character that counted. And scholars Mayer and Salovey came up with the concept of emotional intelligence, an idea popularized by Daniel Goleman. We should have control over our emotions, and see the bigger picture. All of these together make up an amphiist, and I apply this reasoning to politics, entertainment, etc. I defend the oppressed by offering an alternative perspective.

I am currently raising funds for publication of an Amphiist newspaper, the primary focus of which will be anti-extremism. We need to find common ground. We need to stop thinking in terms of liberals against conservatives. Right against left. Men against women. One race against another. One religion against another. If you would be interested in contributing, please consider supporting my work at Paypal via jaclyncarter2005@gmail.com.

This is a story of teenaged Indian boy Mukul, who is inspired to overcome being poor, and to reach his full potential by not only having a wonderful, supportive family, but also by becoming a successful businessman. He learns about emotional intelligence, and what is meant by a natural aristocrat. He partners with another young Canadian guy who doesn't have a wonderful, supportive family but wants to be happy through helping another. This tale of two cultures also asks questions about what constitutes the perfect woman for a very successful man.

This is a story of Catherine, who is inspired to control her feeling of worthlessness, and to reach her full potential by leaving the island which threatens to destroy her. It looks at the things that are right about organized religion, and the things that are dangerous. By the end of the story, she has learned to love herself, and how to live a happy, meaningful life in spite of those who discriminate against her. Based on the author's true story in the Church of Jesus Christ of Latter-day Saints.

Here are my Top Ten picks for the best Agatha Christie books, at least in my
opinion. And I take great pains to explain why, using the textual evidence from her books to show how
peerlessly brilliant she was.

WOW includes many positive, uplifting quotations. They are broken down into 4 main areas: spirituality; humour; friendly banter; and, insights. Hopefully, they will make anyone who reads them think about the issues of today–but also have some fun.

This is a story of Hollywood liberal Melisande, who is tricked by the main man in her life into making a conservative film, and as a result, she begins to see people with more nuance than she ever has before. She becomes more moderate in her politics in this celebrity satire, and also begins to see people as a mixture of good and evil.

I'm sitting in a restaurant in Green Bay Wisconsin and just finished your book. WOW WOW WOW! So freaking amazing. You have so captured the nature of the marginalized...your postscript at the end WAS ABSOLUTELY GREAT. Your book spoke to me at a heart level and encouraged me about my own feelings of insignificance. Thank you so much for writing this very heart touching work of art. You are an amazing person who I would be proud to have not just living on but running my island all day every day  In short your book is AWESOME!!!!